Do you know what your Kardashian index score is? If not, you should work it out now, according to a paper by Neil Hall, professor of functional and comparative genomics at the University of Liverpool.

Professor
Hall’s measure takes its name from Kim Kardashian, the US television
personality who, he says, is famous simply for being famous rather than
for any discernible talent or skill.

“You could say that her
celebrity buys success, which buys greater celebrity,” he writes in the
paper, titled “The Kardashian index: a measure of discrepant social
media profile for scientists” and published in the journal Genome Biology.
“Her fame has meant that comments by Kardashian on issues such as Syria
have been widely reported in the press. Sadly, her interjection on the
crisis has not yet led to a let-up in the violence,” Professor Hall
writes.

He believes that there are parallels to be drawn in
academia and, specifically, science. “I think it is possible that there
are individuals who are famous for being famous (or, to put it in
science jargon, renowned for being renowned),” he writes. “We are all
aware that certain people are seemingly invited as keynote speakers, not
because of their contributions to the published literature but because
of who they are.

“In the age of social media there are people who
have high-profile scientific blogs or Twitter feeds but have not
actually published many peer-reviewed papers of significance; in
essence, scientists who are seen as leaders in their field simply
because of their notoriety.”

To explore his theory, Professor Hall
plotted the number of Twitter followers a scientist had against the
number of scientific citations they had received to calculate their
Kardashian index score. Those individuals with a highly over-inflated
number of followers (compared with the number that would be expected)
are the Kardashians.

“Social media make it very easy for people to
build a seemingly impressive persona by essentially ‘shouting louder’
than others,” he says. “I propose that all scientists calculate their
own K-index on an annual basis and include it in their Twitter profile.”

Not
only will this help others decide how much weight they should give to
these scholars’ tweets, he writes, but it might also incentivise those
who are high up the K-index to “get off Twitter and write those papers”.

“Interestingly,
in my analysis, very few women (only one in fact) had a highly inflated
Twitter following, while most (11/14) had fewer followers than would be
expected,” he adds. “Hence, most Kardashians are men!”

The study
“does not prove that we, as a community, are continuing to ignore
women”, or that women are “less likely to engage in self-promotion”, he
says, but it is consistent with either or both of these scenarios.

“I
don’t blame Kim Kardashian or her science equivalents for exploiting
their fame; who wouldn’t?” Professor Hall concludes. “However, I think
it’s time that we develop a metric that will clearly indicate if a
scientist has an overblown public profile so that we can adjust our
expectations of them accordingly.”

Measuring the
number of papers which are published each year, publication
productivity is the factor which shows the reputation of universities
and countries. However, the effect of growing economy and using internet
on the publication productivity in Asian countries has not been
discovered yet. The present research is going to figure out the
publication productivity among the elite universities in Asian countries
and also ten top universities around the world in the last twenty years
(from 1993 to 2012). Furthermore, the current research is aimed to
study the relationship among publication, gross domestic product (GDP)
and internet usage. It is worth to mention that the publication of the
top Ten Malaysian Universities was regarded for the similar period of
time. To get the exact numbers of documents like papers, conference
articles, review papers and letters which are published by the
universities in the last twenty years, the writer of the same paper used
the Science Direct database. Moreover, the data for GDP and the number
of internet usage was collected through the World Bank database (World
Data Bank).To compare all kinds of publications,one-way ANOVA was used
and to investigate the impact of economic growth and internet usage on
publication productivity, multiple regression analysis was applied.The
results showed that the rate of publication growth was 1.9, 20.9, and
65.5 in top universities in the world, ASEAN countries and Malaysia,
respectively.The results also showed that there was a positive and
significant correlation between GDP and the number of internet users
with the number of publications in ASEAN and Malaysian universities.
Internet usage had much more influence in comparison with the GDP in
predicting the number of publications among these groups except for top
ten Malaysian universities from 2003 to 2012. In summary, publication
trends in top ten Malaysian and ASEAN universities are promising.
However, policy makers and science managers should spend much more
percentage of their GDP on Internet facilities and research studies that
their outputs lead to more rapid economic growth and internet usage.
Check full metadata for this record

"SEEK" links will first look for possible matches inside E-LIS and query Google Scholar if no results are found.

)
You want your article to be read. Of course the first and most important thing is to write a good article and get it published in a good journal.


Once that’s done, here are some things you can do to make the article easy for others to find, which means more people will see it and be more likely to read it and cite it.

(If you want to make your web site, or your project’s, more visible in search engines, see Search Engine Optimization: Advice for York Researchers. If you have any questions about either kind of SEO, get in touch with William Denton, web librarian.)

Google Scholar indexes
scholarly material from proprietary sources such as subscription
journals and grey literature from the open web. It can be easier to
search there than to go into several different databases.

OASIS (Open Access Scholarly
Information Sourcebook) explains what open access is, how it works, why
it works, and how to get started.


Put it in YorkSpace

Google Scholar knows that YorkSpace is the institutional repository at a research university. It gives high weight to articles stored there. The YorkSpace Deposit Toolkit explains everything you need to know to add your work, with instructional guides, videos and documentation

Here you will find a list of online
“web 2.0″ tools, designed for researchers. The list will be updated
progressively as this blogs explores the different services out there.
I - Using “the crowd” for research (crowdsourcing, surveys…)


Other crowdfunding seeks active participation of the public or of
other researchers to accomplish specific tasks. Thses site are part of a
movement called citizen science:

Social
network sites seem to come in at least 4 different flavors: site that
offer tools to manage your references, tools to increase your online
presence and ease networking, tools to exchange and engage in new
collaborations and more site that are specialized in specific scientific
fields. Keep in mind that this classification is not exclusive since
all have overlapping functionalities.

Reference managers orientated:
Networking orientated:
Social exchange orientated:
Specialized social network:
There are probably many more out there. Please feel free to comment or contact me if you know of any that are not listed here.

One important aspect of the open science movement,
is making your research always more accessible. This means thinking of
new ways to communique scientific research, and online tools to share
scientific related materials will certainly. So brows bellow and share
away!


- IV Lab and Research Management Tools -
Research laboratories can
be organizational mess when it comes to ordering, inventory, recording
of experimental data or equipment management. Luckily  there’s an
increasing collection of great online tools out there that helps you
manage a lab. Here’s a few, some of which will be featured by a blog
post in the upcoming weeks:


Measuring your impact:
The good old citation number has been the standard metric for impact
for years. How do you know how impactful your research is in the
research 2.0 era? These services provide a new evalutation of research,
in part by considering the online ecosystem. This alternative metrics
has been named “Article Level Metrics” or “Altmetrics” (alternative
metric).


VI – Find expertise -
Whether it’s a biology lab needs to find a
software engineer, or a chemistry lab that needs to access to the latest
mass spectrometry instruments and analysis, a whole range of online
services have emerged these past years help you connect to experts and
expertise.

VII – Find, read, organize and discuss papers -
A good chunk of the researcher’s work is to
find the right papers, then to understand and discuss them to generate
new ideas.  A series of tools have been developed to help in that
process.

Nader Ale Ebrahim
Nader Ale Ebrahim currently works as a “Research Visibility and Impact” freelancer consultant. Nader is also an adjunct lecturer at Alzahra University. He was working as a visiting research fellow with Institute of Management and Research Services (IPPP), University of Malaya from 2013 to November 2017. Nader holds a PhD in Technology Management from the Faculty of Engineering, University of Malaya. He has over 25 years of experience in the field of technology management and new product development in different companies. His current research interests are University rankings, Open access, Research visibility, Research Tools, and Bibliometrics. 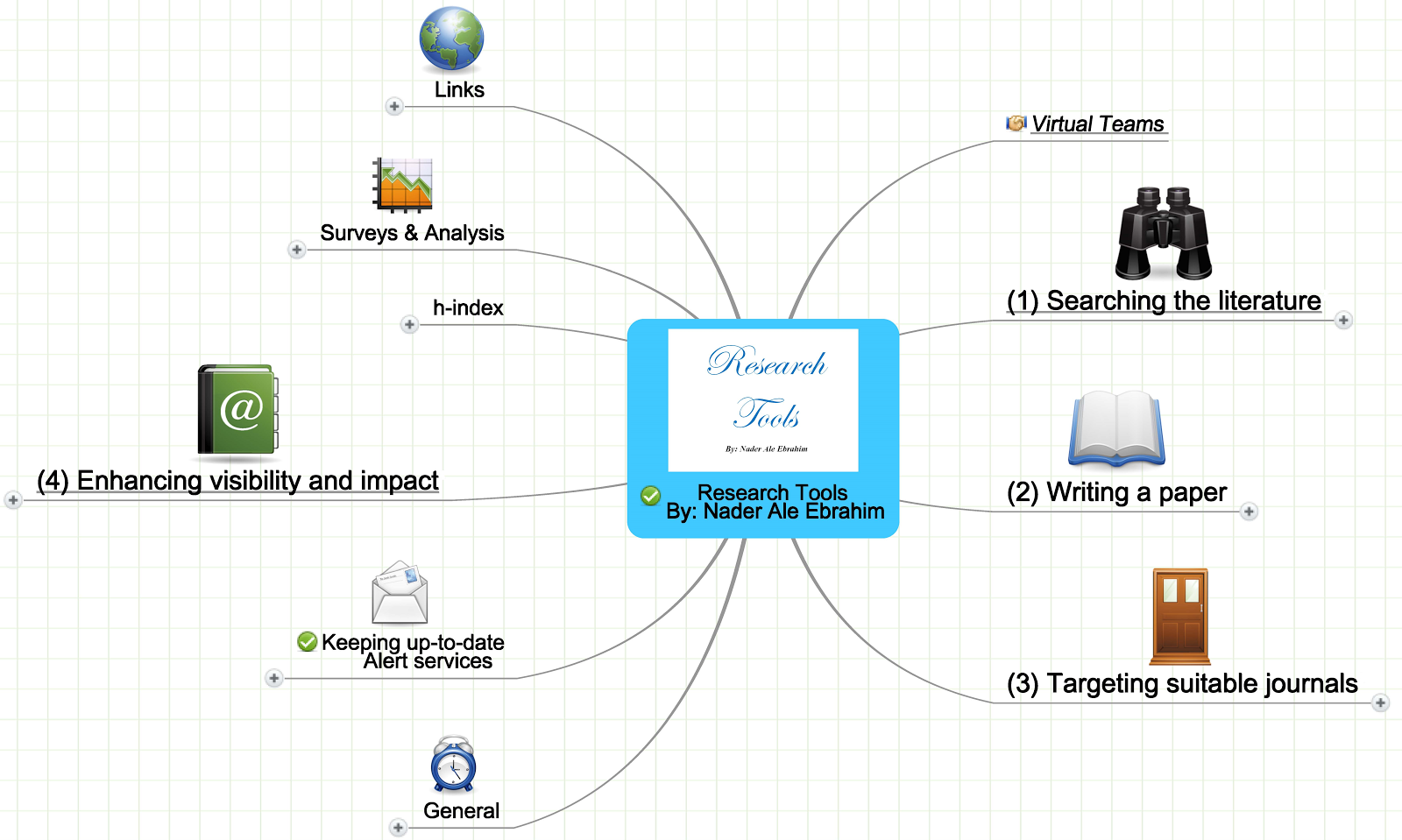